We received quite a few questions concerning the equipment used at 7QNL.
Below some information and (of course!) pictures.
Note: click on images to enlarge (as of May 27th we have internet again : -)

I modded my FT-857 inside as the modulation of these rigs needs some ‘improvement’.
Below my headset, made of a 3.50 Euro headphone (this is one of the best headphones I
ever bought (honestly!) and an electret mic capsule with earplug foams to suppress ‘plops’.. 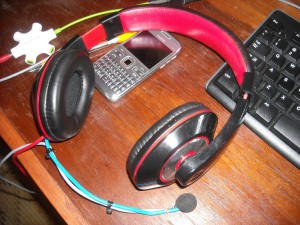 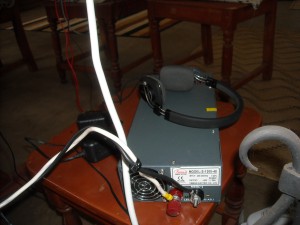 Amplifier power supply. What still remains a mystery to me:
I lost the GND clamp/screw inside my suitcase during the flight (???)

Keyer: K3NG NANO keyer (Winkey compatible (with some patches by myself)

Logging software: N1MM (this package had no problems with my callsign: 7QNL)

For this trip I built the ‘7QNL amplifier’ as I could get a HF pallet for a very good price.
Inside is also the remote Beverage switch circuit (right knob). 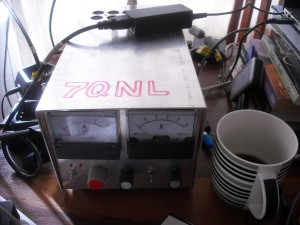 Antennas: I changed plan because of available material (bamboo and dead pine tree poles <- they are straight and high!) and the fact that I took five coax cables:
2 x 33m Aircell 7 (tnx PI4RCG) and 3 x ~25m H155 (tnx PA7FA). 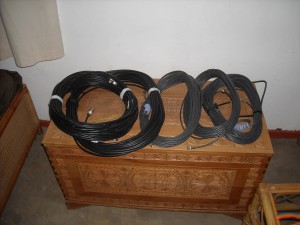 Here the coax cables enter the shack (in fact it’s the living room
of the estate/apartment): 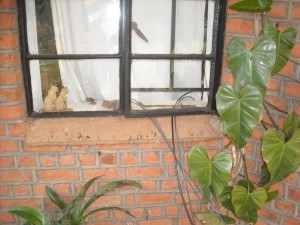 10, 15, and 20m VDA’s were built ‘on the fly’ after 4NEC2 modelling. As I mentioned elsewhere on this site: these flabbergasting simple antennas work very well, are built within no time, and their construction is rigid due to the triangles in the diamond structure (contrary to e.g. Moxons, although VDA’s own the ‘Moxon effect’). 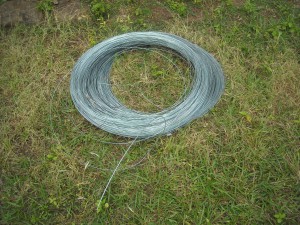 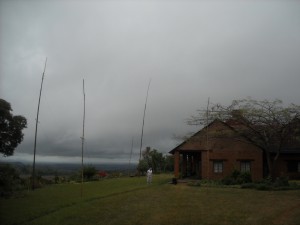 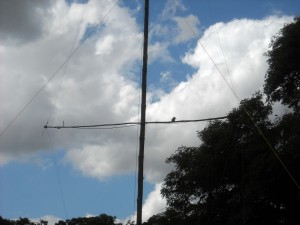 Believe it, or not, this bird rests/sits in my 20m VDA every day at the same
time after the antenna has been constructed (?!).

Terrace view towards East.
Left the 40m deltaloop feedpoint (1/4 wl from the apex): 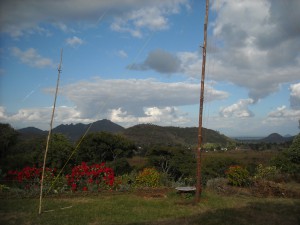 Close up of the deltaloop feedpoint: 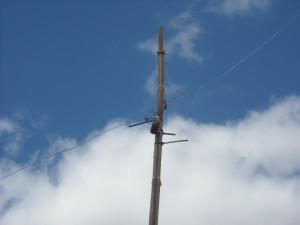 I prepared some brackets with N-connectors and ‘handy holes’ for the antenna
feed points. 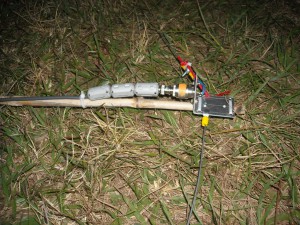 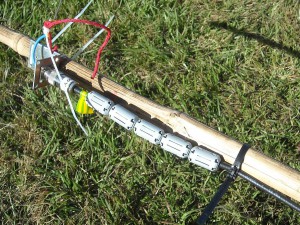 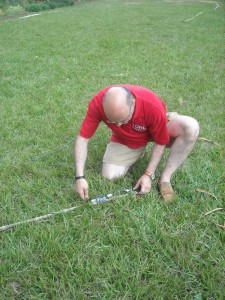 A view towards the operation position with open amplifier (to adjust the
Beverage switching voltages after rolling out the Beverages): 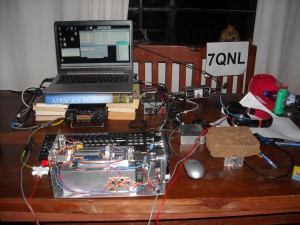 Africa’s Finest … 7QNL !
Note the stone on the paddle to prevent it from walking away while keying ; -)
The amplifier has a hardware sequencer (to be 101% safe).

RX-antennas: Initially I targeted for 4 x 160m Bevs, but this appeared too long.
Our QTH is on a hill and rolling out the Bevs in the bush was a problem.
Moreover.. one Beverage was running through a small village and the local people feared
the wire. After negotiating with the people a compromise came out: 80m wire lengths were the limit.

For all those JA’s I worked on 40m, this is what you have been received through: 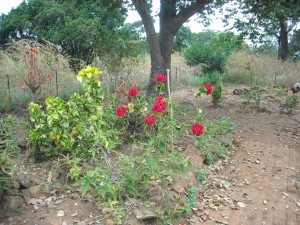 NE/SW Beverage (~80m long) around 1m above the ground. 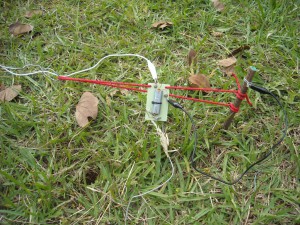 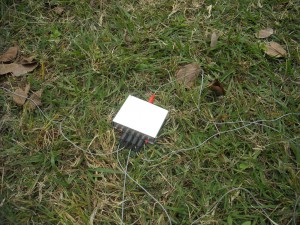 In Holland I was informed that ~1 km of galvanized 2mm diam wire was
arranged. To be utterly sure that this wire could be soldered (easily) I
took some ‘S39’ (yes, the original!) soldering fluid… and put it in
a nasal spray/drop container. In Malawi I attempted to write ‘S39’ on it: 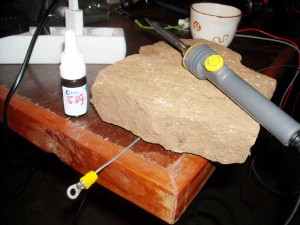 One thought on “Equipment” 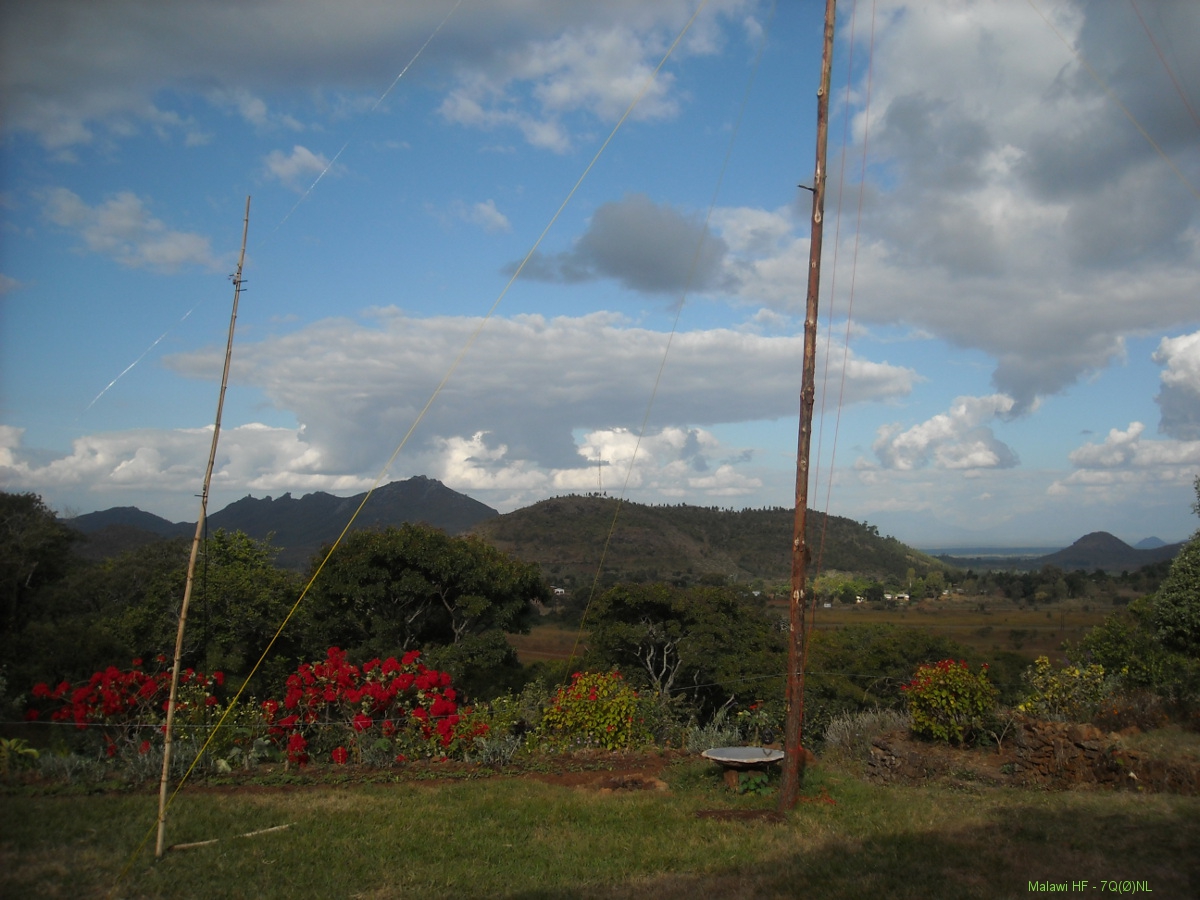 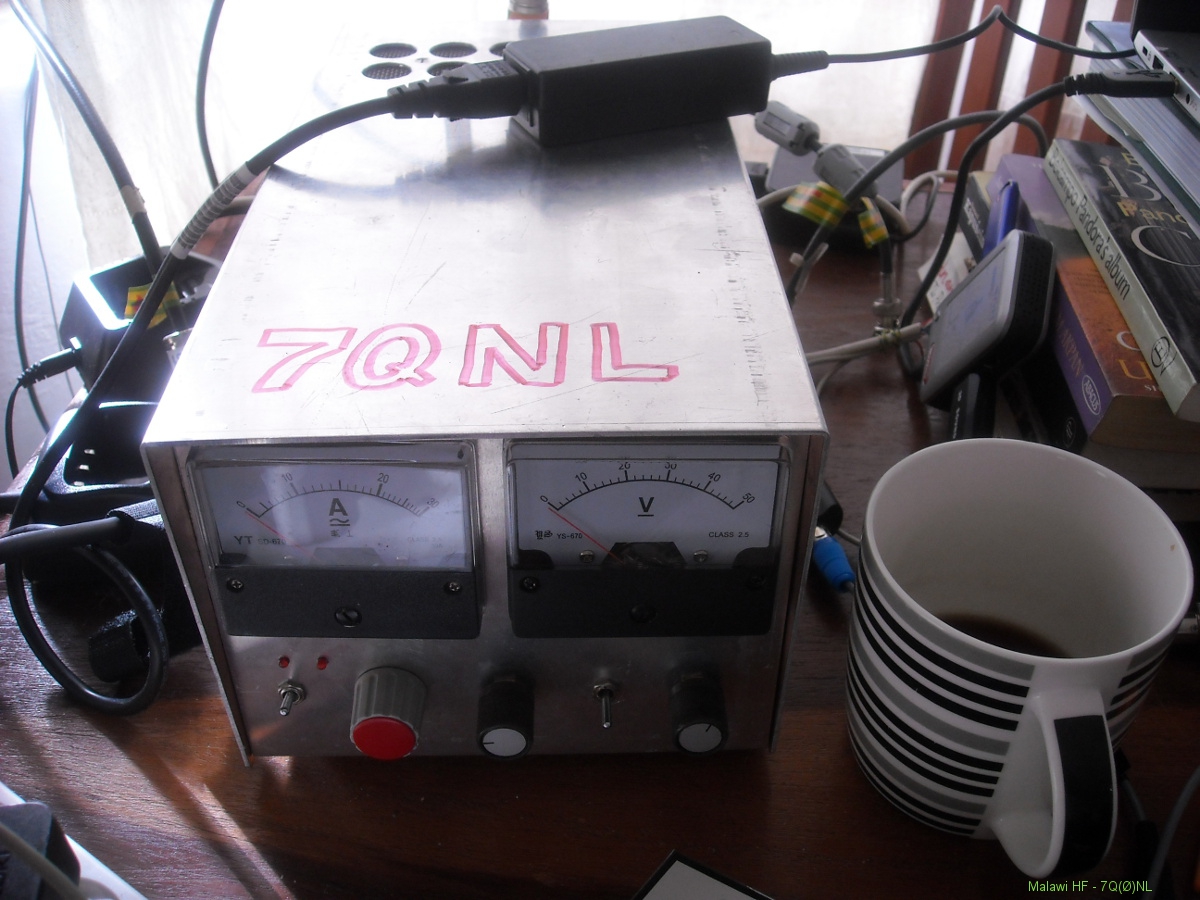 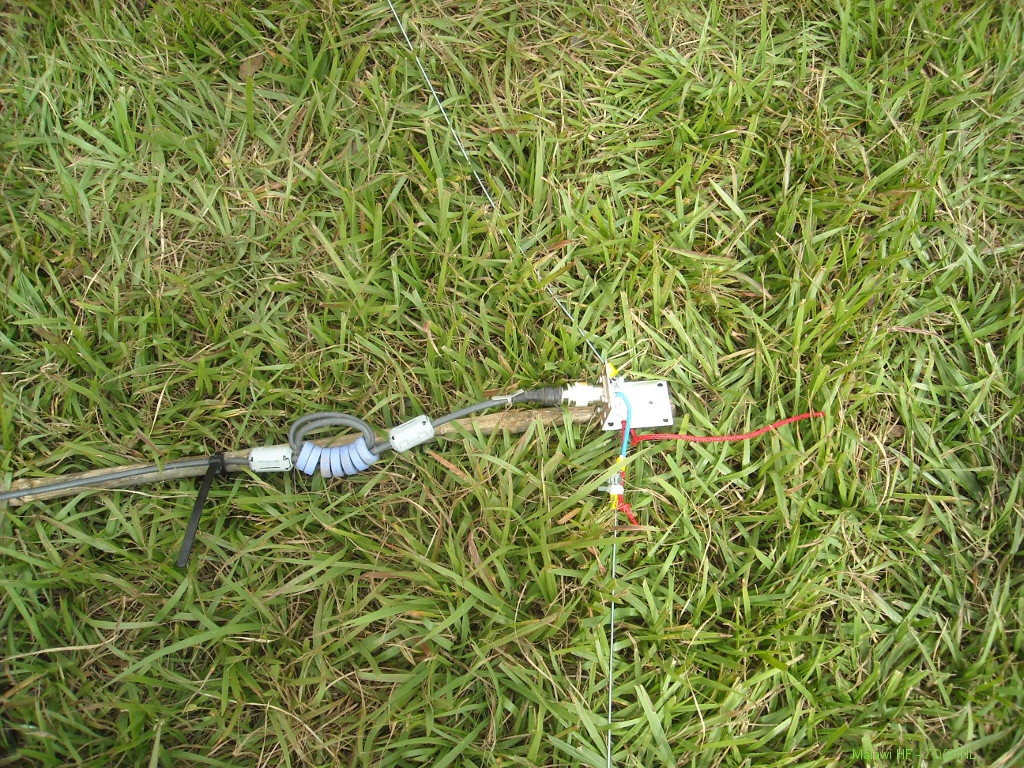 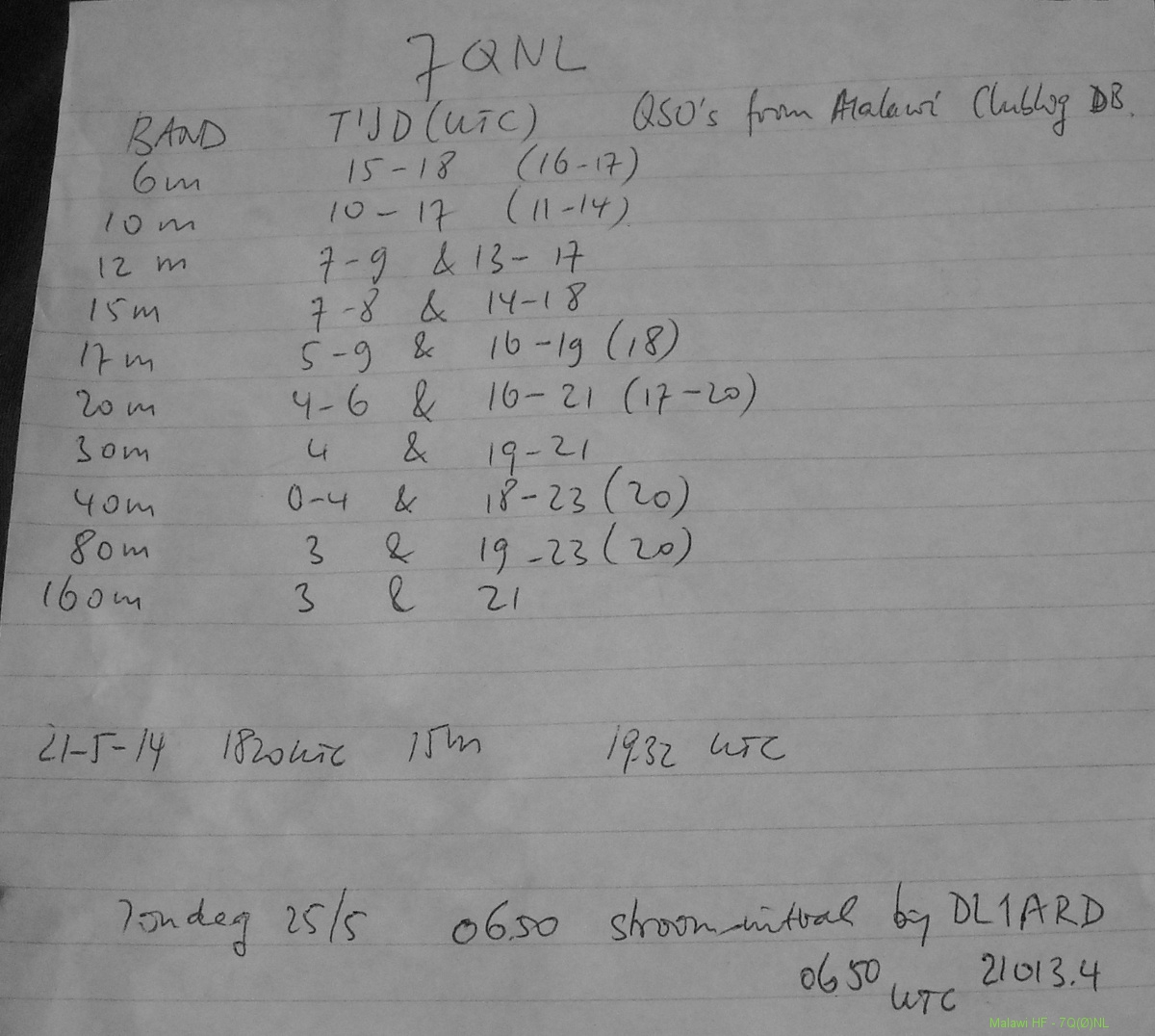 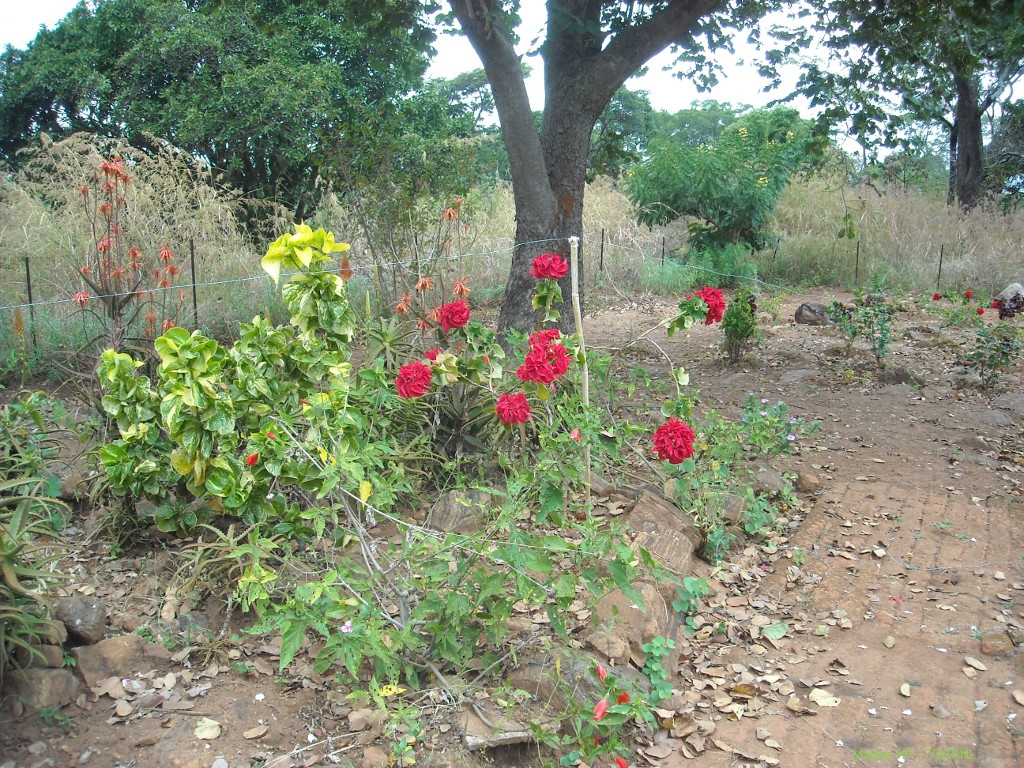 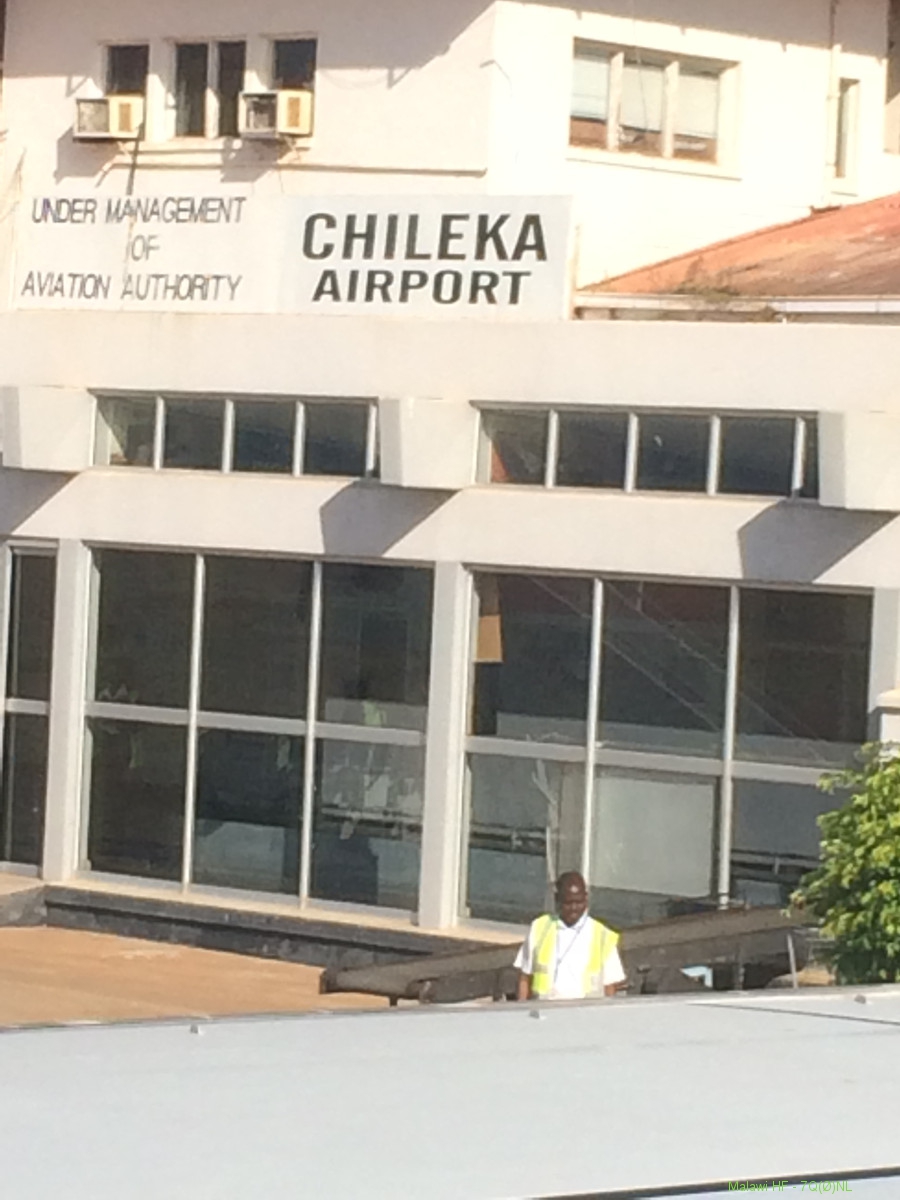 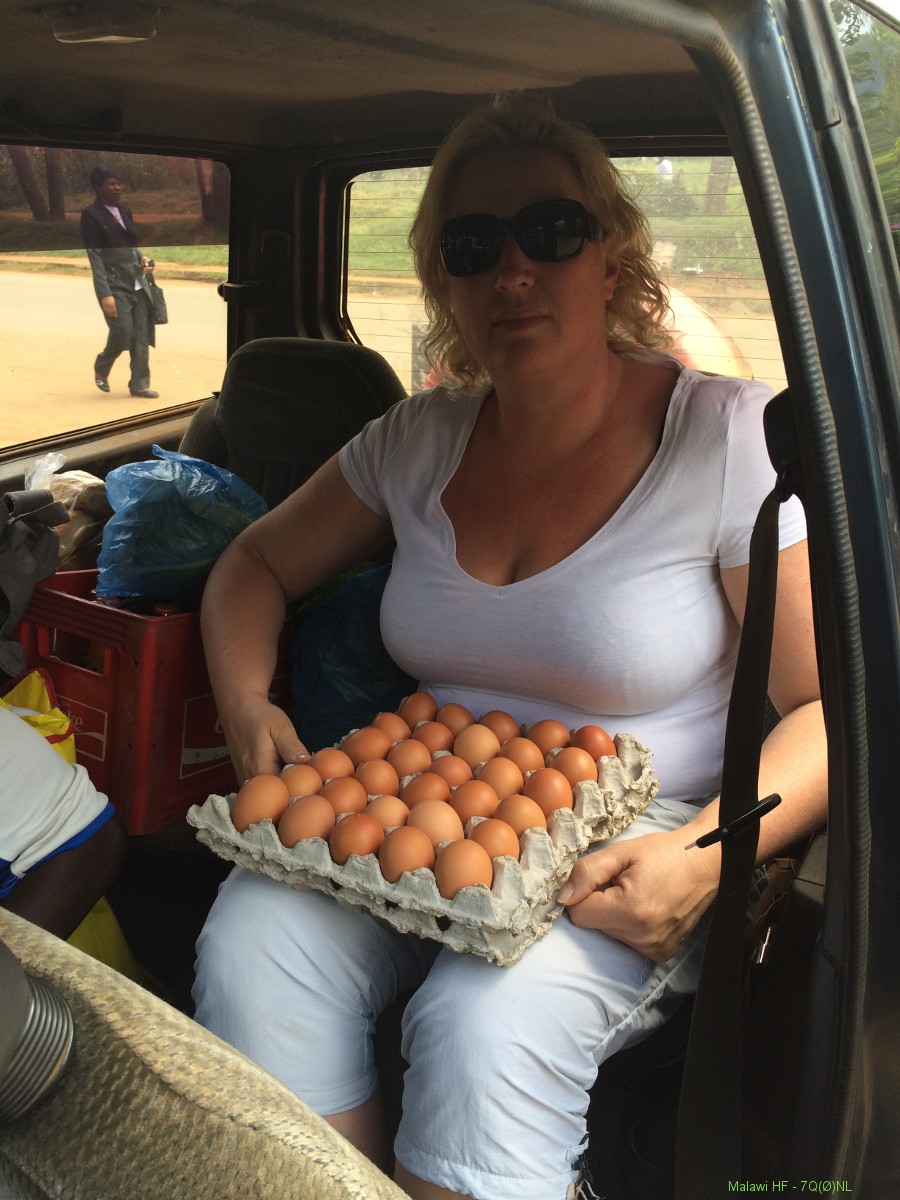